There are a lot of misconceptions and stereotypes about veganism. Some people think that all vegans are judgmental and preachy. Others believe vegans must be unhealthy and malnourished. The truth is, there is no one “type” of vegan. Vegans come from all walks of life, in all ages, shapes, and sizes, and there are as many different ways to live a vegan lifestyle as there are people who call themselves vegans. 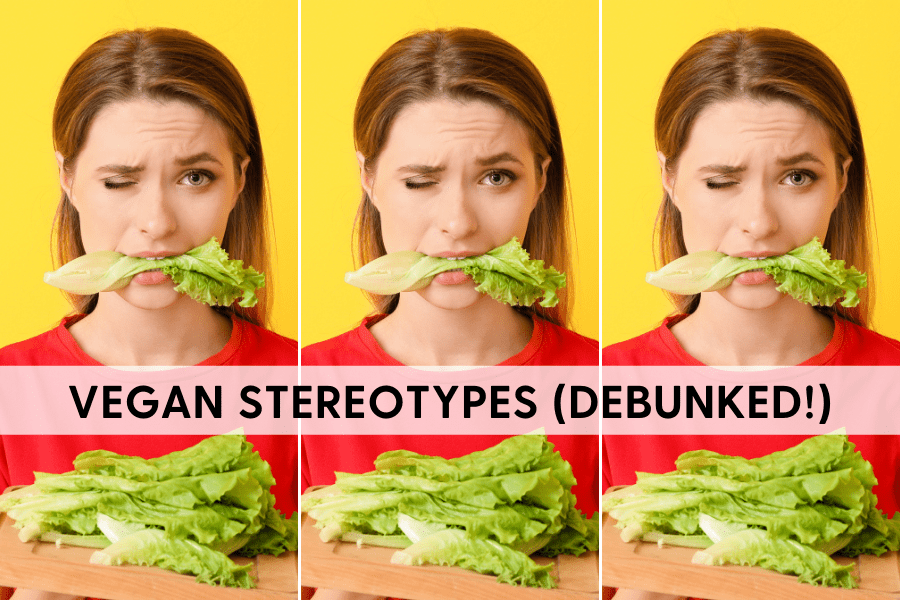 As something who has been vegan since 2012, I’ve heard ALL the jokes (from friends, family, AND coworkers who liked to tease me about being vegan).   And that’s ok.  But some of the stereotypes I see on the internet are funnily annoying (I made that term up)…not even close to being true.  In this blog post, we will debunk 8 common vegan stereotypes and show you the truth about vegans and the vegan lifestyle.

While there may be some vegans who fit this stereotype, the majority of vegans are kind, caring, and open-minded. Veganism is a lifestyle choice that is based on compassion for animals, so it stands to reason that most vegans are mostly empathetic people.

But this empathy and compassion towards animals may also be why vegans might be thought to be “judgmental”.  Most vegans care so much for animals that they become very passionate when it comes to standing up for animals.  And this could come across as judgmental by some.

I like this explanation from Tobia Leenaert, Belgian Author and founder of ProVeg International:

“Vegans may also come over as more judgmental to people than we actually are. That’s because many people feel guilty about consuming products they know are not in accordance with their values. The judgment they feel coming from vegans, may be their own judgment of themselves. That’s why they will often be on the defensive when talking with vegans (or even being in their presence).” – TOBIAS LEENAERT, The Vegan Strategist

And one last thought on this stereotype….isn’t a person saying that vegans are judgmental, actual being judgmental themselves?  Hmmmm….. 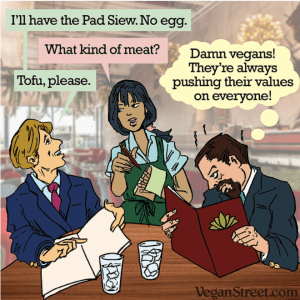 Vegan Stereotype 2: All Vegans are Healthy, Lean, and Fit

Ok…this one.  Have you tried vegan food lately?  It’s delicious!!!  I gained weight when I first went vegan.  I was on a mission to find all the amazing vegan food I could….and I PASSED the test (which wasn’t as easy in 2012 as it is now)!  DELICIOUS vegan food was not hard to find….and there was a lot of it.

But the truth is, there is no one “type” of vegan. While some vegans may be healthy and fit, others may not be.  Some vegans are “junk food vegans”, subsisting on French fries and Oreos (both of which are usually vegan).  Some vegans are whole food, plant-based vegans (vegans who prefer to eat more nutritiously), and they may just fit this stereotype of the “healthy, lean, and fit vegan”.

But not ALL vegans fit ONE physical type.  This leads us to the next stereotype….. 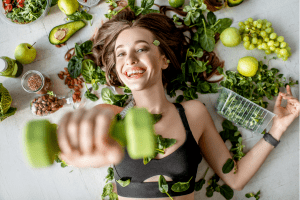 Vegan Stereotype 3: All Vegans are Unhealthy and Malnourished

Then there’s the opposite of the “all vegans are healthy and fit”.  It’s the “vegans are unhealthy and malnourished” stereotype.

If you’re eating a diet primarily consisting of junk food – or if you’re simply just not eating enough – you very likely will end up unhealthy and malnourished.  This applies whether you are vegan or not.

In terms of whether a vegan diet is healthy or not, a study published in The Journal of Nutrition linked plant-based vegan diets to a longer and healthier life due primarily to the decreased risk of heart disease and cancer.  So while some people are unhealthy and malnourished, a plant-based vegan diet has been show to be one of the healthiest and most nourishing ways to eat! 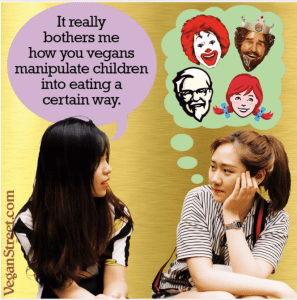 And there are MANY different forms of activism.  Some vegans may picket outside factory farms, trying to bring awareness to how animals are treated behind the walls.  Others (like me) might start a blog to share their story about being vegan….and to help others along their vegan path.  Some vegans wear clothing that sends a message (have you seen the tee-shirt on Herbivore??) And some might simply cook yummy vegan food for their friends and family, to encourage them to consider choosing vegan options more often.

Many vegans choose to do nothing at all in terms of advocacy, other than to enjoy their own vegan life.  Activism takes many forms, and there are many ways vegans share their passion for making the world a better place for animals without being a vocal advocate. 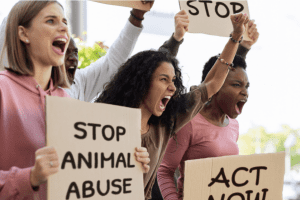 Vegan Stereotype 5: All Vegans are Hippies

This stereotype started back in the late 1960s and 1970s, when many “hippies” were also vegetarian.  My best friend’s parents were hippies in the 1970s, and at their house, there was always kefir and carrot cake waiting for us after school (back in the 1970s, this was hippie food in my young eyes). But nowadays, ANYONE can be vegan.

ANYONE can be vegan. 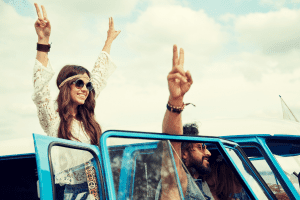 Caring for the welfare of animals doesn’t mean that vegans care more about animals than people.  And it should be said that caring for animals and caring for people are not mutually exclusive…..one can have empathy for both animals AND people at the same time.

Some people become vegan because they not only care about the welfare of animals but also care about the health of people. After watching the film Forks Over Knives, I realized that my mom – who had recently had a heart attack and then a stroke – did not need to suffer from heart disease.  It was caused by the food she had eaten most of her life.  I was sad and angry that her doctors had never told her to change her diet (except to “eat less salt”)….and rather just gave her prescription meds.  Her first solid meal after waking up from heart surgery was a tray of meatloaf and mashed potatoes and gravy (with pats of butter and a salt shaker. on the side).  These were the exact types of food – meat and dairy – that had CAUSED her heart attack and stroke.

I lost my mom to heart failure in 2013.  And part of why I’m vegan is because I don’t want other people to suffer from a completely preventable disease as my mom did.  I want to spread the message of how much healthier a vegan life can be.  And I would love to see others change their diets away from meat and dairy….while they still have time….and before it’s too late.

Other vegans know how the animal agriculture industry treats not only the animals but the PEOPLE who work in the slaughterhouses:

“Slaughtering animals and processing their flesh is an inherently dangerous industry where company profits consistently take priority over workers’ most basic rights. Today, U.S. slaughterhouses and “meat”-processing facilities employ over 500,000 workers.[1] In their endless goal of higher volume and greater efficiency, these corporations knowingly jeopardize workers’ safety every day. For decades, the state and federal agencies responsible for ensuring a safe and healthy work environment have thoroughly failed to institute and enforce basic labor laws to protect these workers. The result is an industry where corporations set the rules and government agencies follow. Consequently, workers’ most basic rights and interests are compromised and the animals suffer greatly.” – Food Is Power

So yes, there may be SOME vegans who care more about animals than people, just as there are some jocks who love bacon more than their girlfriends.  Every person is a unique individual (vegan or not). 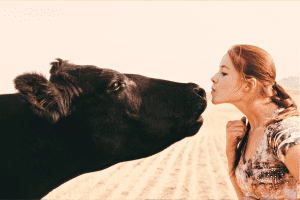 Vegan Stereotype 7: Being Vegan is SO Restrictive

Some believe that all vegans can eat is lettuce and kale, tofu, nuts, and seed…..and yes, that WOULD be restrictive!  But rather than thinking about foods they CAN’T have, most vegans prefer to think about all the foods they CAN have.

And there is pretty much a vegan substitute for everything – meat, cheese, dairy – cakes, cookies, pies, ice cream – you name it.    There’s also more and more vegan and cruelty-free brands of EVERYthing….available everywhere!  In the U.S., both Target and Walmart carry a huge assortment of vegan items.  And have you seen Instagram feeds from vegans in the U.K.??  They have some of THE most amazing vegan options I have ever seen.

Most long-time vegans will tell you, they are eating a much larger variety of foods now than before going vegan!  So the stereotype that being vegan is restrictive is just not true.

So yes, some vegans love to tell others that they’re vegan.  But most vegans will just do so out of necessity.  When they’re ordering food at a restaurant.  Or if they are going to someone’s house for dinner – out of courtesy.  Because honestly, who wants to go to someone’s home for dinner and not be able to eat anything?  This is an uncomfortable situation for the vegan AND for the host.

So while yes, some vegans LOVE to tell people they’re vegan, most do not. 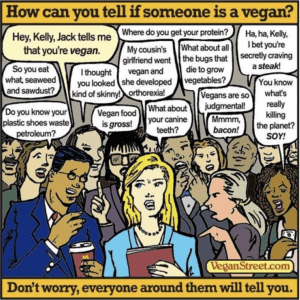 5 Common Arguments Against Veganism (and How To Respond

Holiday Survival for Vegans: 6 Tips to Help You Get Through Holidays and Family Gatherings