Want to know some of the BEST vegan recipes for non-vegans to try?  These 7 recipes – from some of my favorite recipe websites and bloggers – are my go-to recipes – especially when I have non-vegan friends and family over. 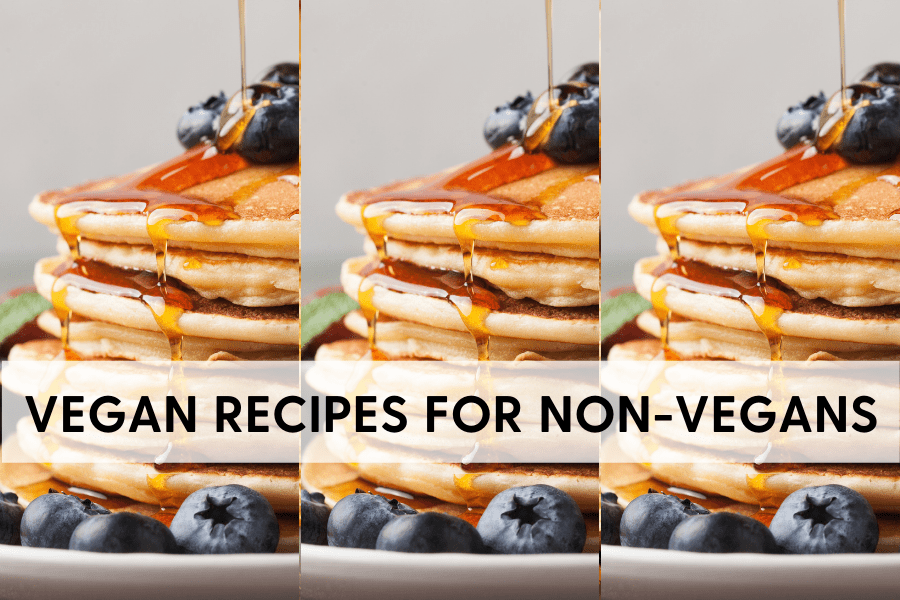 Whether you are vegan (like me!) or simply trying to eat less meat or cook more plant-based meals, there are a lot of amazing vegan recipes out there to be made and devoured.  So I wanted to share a few vegan recipes for non-vegans to fall in love with – from some of my favorite recipe creators!  And because these are all SO good, no one will ever miss the meat, or dairy, or eggs…I promise!

I make each of these recipes several times a year (if not several times a month!), and they are what I like to call my “vegan makers” – because they are SO good, they can make anyone want to “go vegan’! Check them out and try them for yourself!

The Fluffiest Vegan Pancakes recipe from Tasty.co, is one of my favorite vegan recipes that I LOVE to share with my vegan and non-vegan friends!  These pancakes taste better than I remember pancakes tasting before I went vegan.  And yes they really are fluffy too!  AND you probably have all the ingredients in your house to make them right now  (so you probably should!).  🙂

In all honesty, I could probably eat this Chopped BBQ Tofu Salad (from blogger Delish Knowledge) every day!!  Before going vegan, I used to love the BBQ Chicken Chopped Salad at CPK (California Pizza Kitchen)….but I think this vegan version is SO much yummier (and healthier).

This recipe is so AMAZING…..you might want to make a double batch!  Another recipe from Tasty.co, which although not a vegan recipe site, sure seems to know how delicious and satisfying vegan food can be for everyone!

4. The Best Vegan Chili Ever

The Best Vegan Chili Ever – that’s actually the name of the chili recipe and Sam, the creator of the It Doesn’t Taste Like Chicken vegan recipe blog was NOT kidding when she named this recipe.

(Quick recipe story…every fall I have a bonfire gathering in my back yard with friends – most of whom are not vegan – and I could never find the perfect chili recipe to make and share. Until I found THIS recipe. Everyone took seconds….and thirds!….and there were NO leftovers in the crockpot by the end of the night. It is the BEST chili recipe vegan or not!) 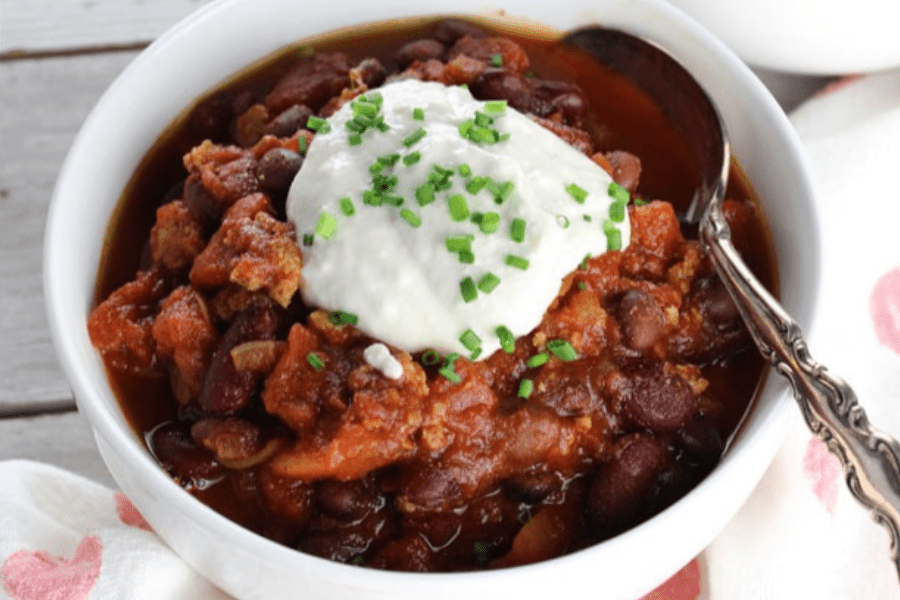 This is my FAVORITE red lentil curry recipe. No surprise it’s a fan favorite at recipe creator Nisha’s website, Rainbow Plant Life. It is SO delicious, whenever I make it I even impress myself…haha. I’ve raved about this recipe to family and friends, and everyone who has tried it has fallen in love with it too. It is BETTER than take out!!

This Easy Vegan Fried Rice Recipe from Minimalist Baker is one of my favorite comfort food recipes (besides the vegan-ized version of my mom’s mashed potatoes). It’s like the best take-out fried rice – but BETTER! And it’s healthy because it’s not really “fried” – there is only a very small amount of OPTIONAL oil. This is SO flavorful and satisfying….anyone would love this recipe!!

Now after all that yummy food, of course, we need dessert!! And what could be better than chocolate and peanut butter married into a pie?!? (Ummmm…..nothing!!) Mistress Ginger knew what she was doing when she created this recipe – the Tie the Knot Chocolate Peanut Butter Pie is decadent, delicious, and will woo ANYBODY (whether they are vegan or not!!).

(One more quick recipe story…when I used to work in the corporate world, I made this pie and brought it in to share. I left it in the break room for anyone to enjoy, and found two of my coworkers enjoying multiple slices – and these two coworkers were known for their “eeew vegan food is gross!” comments. When they found out I had made the pie, they were very scared as they realized that it must be vegan! Yep!….it’s vegan alright!! But still, they could not stop eating it. This pie is THAT good.)

This post was all about some pretty AMAZING vegan recipes for non-vegans to fall in love with – from some of my favorite recipe creators!

I hope you found this post helpful.  If so, you may also enjoy the following:

What Happens When You Give Up Dairy?  7 Reasons to Ditch Dairy For Good.