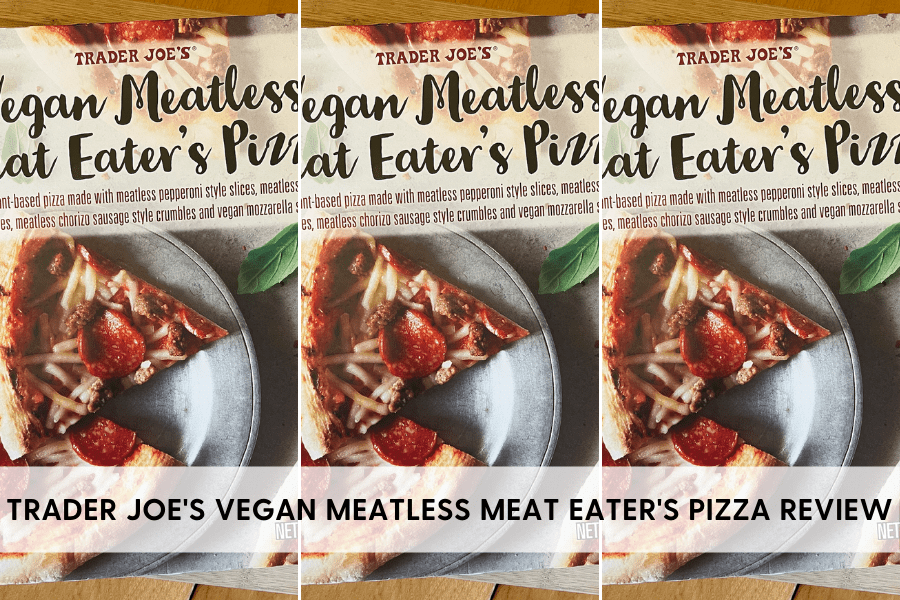 The first time I saw Trader Joe’s Vegan Meatless Meat Eater’s Pizza, I grabbed THREE!!  Why so greedy??  I love pizza, they were only $5.99 each, AND Trader Joe’s often sells “seasonal” items,,,,that are in and out of the store quickly!  So I grabbed them!!

Well, it turns out Trader Joe’s is keeping them IN stock indefinitely!!  So if you’re wondering if you should buy one (or three?!) of these pizzas, you will learn all about them in this review post.

This post contains affiliate links for which I may earn a commission (at no extra cost to you) should you make a purchase. Please see my Terms and Conditions for more information.

For a lot of people who really want to go vegan….pizza is what holds them back.  They believe that when they go vegan they will never eat pizza again.  Or that vegan pizza will have “weird” ingredients on it….like cheese made from the milk of a cashew (works for me?!).

Just a few years ago, vegan pizzas were nowhere to be found….unless you made one at home. But there are a lot of vegan pizzas on the market now….and there are constantly new ones coming out.  So when Trader Joe’s FINALLY launched their very first vegan pizza – the Vegan Meatless Meat Eaters Pizza – vegans across the U.S. (sorry other countries!) rejoiced!

This vegan pizza IS good.  The crust is thin, crispy, and tasty, with simple ingredients just like you’d make at home.  The “meat-less” toppings are some of the best I have had – especially the vegan chorizo and sausage crumbles, both of which have a great texture and delicious flavor.  The cheese has good flavor, but I just wish it would melt more.  Overall, when you put all the ingredients together, I would give this pizza a 4.5 out of 5 stars! 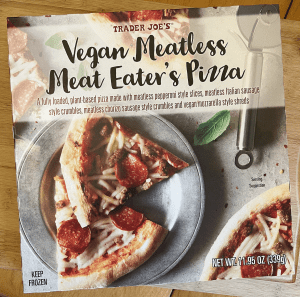 To write this review, I followed the directions exactly as the package stated:

CONVENTIONAL OVEN: Preheat oven to 425°F.  Remove all packaging and place directly on center oven rack for 14 minutes or until lightly browned and heated through.

What exactly does the Trader Joe’s Vegan Meatless Meat Eater’s Pizza consist of?

This is what the pizza looked like before baking: 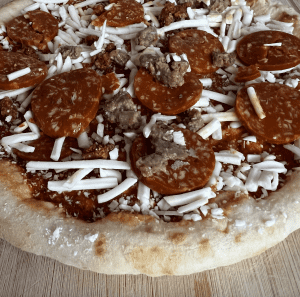 And this is what Trader Joe’s Vegan Meatless Meat Eaters Pizza looked like after exactly 14 minutes (as per the directions): 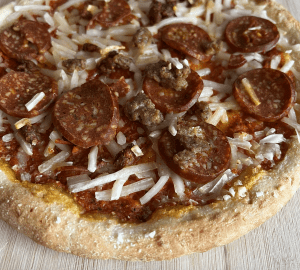 As you can see, the crust is thin and was dusted with flour.  The edges became nice and brown and perfectly crispy after baking.  I thought it had a really nice flavor and texture.  This might be because the crust ingredients are simple and just like you might make at home – wheat flour, water, oil, salt, and yeast – that’s it!  Delish! 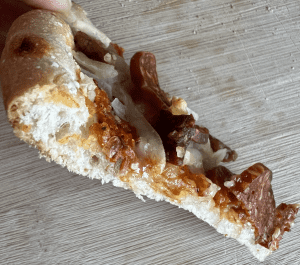 There is not a lot of cheese on this pizza, and I’m okay with that – when I make homemade pizza, I go cheese-less and just top with veggies – so not having a lot of cheese was fine with me! But if you like a lot of vegan cheese on your pizza, you might want to add more!  This is a coconut oil based cheese and it did not melt a lot.  And although I do prefer melt-y and stretchy cheese on my pizza, this cheese tasted good, so the consistency did not bother me too much.

Side note on the cheese: As an experiment, I tried two slices of pizza after baking for 14 minutes, but then put the pizza back in the oven on BROIL for a few minutes.  I wanted to see if I could get the cheese to melt.  While it DID melt a little bit more, the crust became a little TOO hard and crispy, so I think 14 minutes at 425°F. was the perfect cooking time and temperature!

The sauce on this pizza is a simple tomato sauce, again just like you would make at home! The only ingredients are tomato puree, roasted garlic puree, black pepper, dried oregano, cornstarch (to thicken), olive oil, and salt!  There was not a lot of sauce on the pizza, so I didn’t really notice the flavor of the sauce TOO much.  And the other toppings definitely took center stage on this pizza.   But the sauce did provide a nice base for the toppings.

The meat-less toppings – especially the chorizo and sausage crumbles – were some of the best vegan meat-less meats I have tried.  If you are a vegan who doesn’t like “realistic” vegan meat toppings, you might not like these meat-less toppings.  I thought the flavors were delicious – with seasonings just like the real thing.  And the texture was firm and both had a good bite.  The pepperoni was also delicious, however the texture was a little soft.  All in all, I thought these vegan toppings were amazing and really “made” the pizza (but then this pizza IS all about the vegan “meat”!) 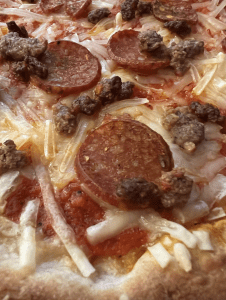 I really like this pizza!  And when I get a craving for pizza, this is one I do buy regularly.  I think the crust and topping combination is delicious….and really the only thing I would like to see improved is maybe a different vegan cheese (I think that both Follow Your Heart AND Violife make AMAZING vegan cheeses – about as close to the real thing as you can get!).  I would also love to see maybe a different pepperoni (it might help the texture if the current pepperoni were a little bit thinner).

I give the Trader Joe’s Vegan Meatless Meat Eater’s Pizza a 4.5 our of 5 stars!

How big is this pizza?  And how many does it serve?

The pizza is approximately 12″ in diameter.

According to the Nutrition Facts on the pizza packaging, this pizza serves 3.

Does this pizza really serve 3 people?

I knew you were going to ask that!!  (Haha.). This is a genuine question because most “serving” sizes are ridiculous (I’m just being real here!).

So…um….maybe it serves 3 people?  IF these 3 people are all under the age of 10…then yes.  OR….if you have side dishes, like a salad, then yes, it might be enough for 3 people.

But honestly, I would say it likely would serve two people, with a side salad or vegetable….OR maybe just one hungry person (or teenager!). 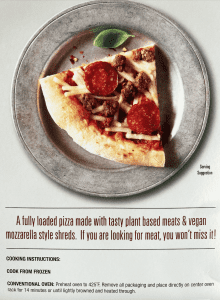 How does Trader Joe’s describe the pizza?

The front of the packaging reads:

And the back of the packaging reads:

A fully loaded pizza made with tasty plant based meats & vegan mozzarella style shreds.  If you are looking for meat, you miss it! 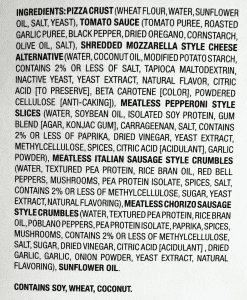 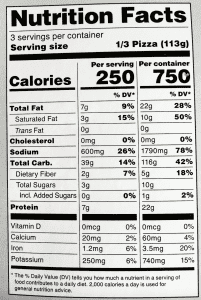 This was a review of Trader Joe’s Vegan Meatless Meat Eater’s Pizza.  I hope this post was helpful. You might also find the following posts interesting!….

What Happens When You Give Up Dairy? 7 Reasons to Ditch Dairy For Good