Is gelatin vegan? Is it even vegetarian? Find out in this post, along with some of the best gelatin-alternative vegan-friendly recipes! 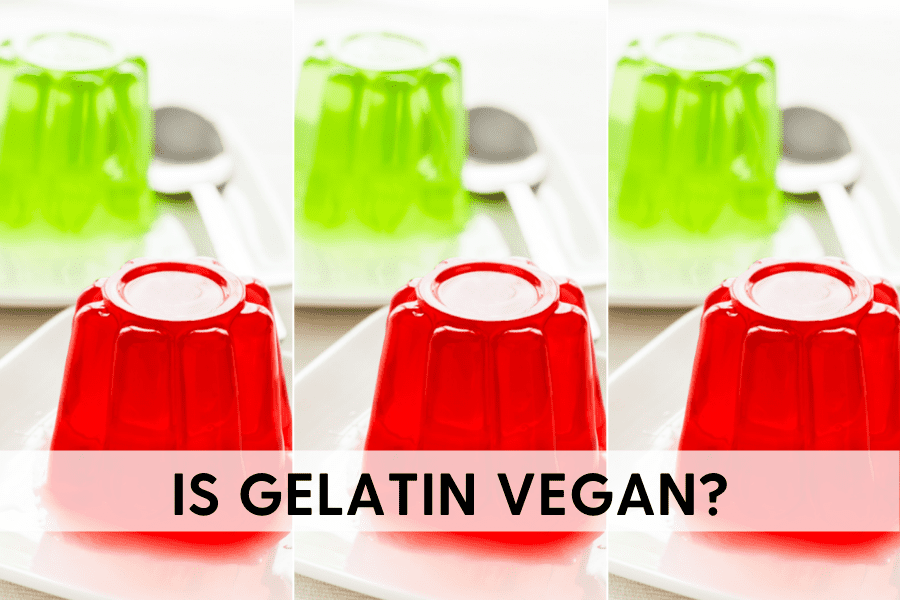 The answer is: Gelatin is not vegan friendly.  This is because gelatin is made from animal parts (including cow and pig skin, bones, cartilage, tendons, and ligaments).  For this reason, any food which contains gelatin would not be considered vegan or vegetarian.

This means that gelatin is also not vegetarian.  Since it is made from animal parts, gelatine would not be considered vegetarian-friendly. 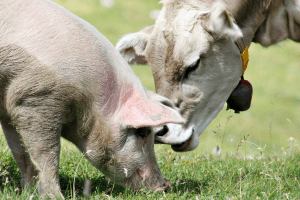 What is the history of gelatin?

Approximately 8,000 years ago, our ancestors learned that by boiling animal skin (hide) and bone they could create a form of gelatin that could be used as glue for tools, furniture, and clothing.

In the Middle Ages, gelatin from animal hooves and antlers was used in medicinal broths – thought to have a healing effect on joint pain.

By Medieval times, gelatin starts to be used as food.  Gelatin was sweetened and flavored and served as dessert, but was also used in savory cooking.

Fast forward to 1845, and gelatin powder was invented and patented in the U.S.A. by Peter Cooper (he also invented the steam locomotive). Peter Cooper’s patent was for what he called “Portable Gelatin”, a dessert powder that only required hot water to be added, and then allowed to set.

This gelatin powder could then be packaged and sold to home cooks for use in gelatin recipes.  As the popularity of gelatin grew, by the 1880s gelatin sheets and blocks were available in addition to powders.

By the turn of the 20th Century, both Jell-o brand gelatin and Knox brand gelatin launched, and both would soon become popular household names.

In addition to being used in desserts, gelatin was  – and still is – an ingredient in many other things, including medications and supplements, cough syrup and throat lozenges, gummy bears and other gummy candies, and even beauty products and make-up.

If you are vegan or vegetarian, in addition to avoiding boxed gelatin mix (such as Jell-o and Knox brands), you should also read the ingredients on the following products’ packaging, to make sure that they do not contain gelatin: 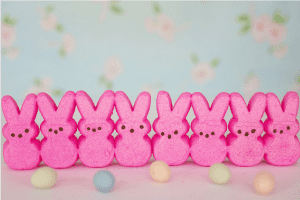 How is gelatin made?

(In all transparency, learning how gelatine is processed made me even happier to be vegan!)

Gelatin processing plants are typically located near slaughterhouses so that the animal products can be processed quickly.  Upon arriving at the gelatine plant, slaughter-house animal parts (including skin, bones, cartilage, tendons, and ligaments) are quality inspected. After inspection, the animal parts are loaded into machines and chopped into small pieces.  The animal parts are then washed under high pressure to remove debris and fat.

The liquid gelatin is then sent through an evaporator that separates liquid gelatine from solid gelatin.  The solid gelatin can then be processed into blocks, sheets, or ground into powder.  For use in the food industry, flavoring, coloring, and sweetener can now be added to the gelatin 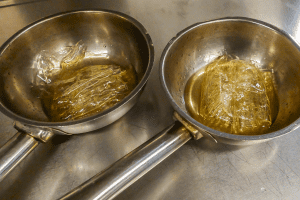 Other common questions and answers people have about gelatin:

Is Knox gelatin vegan? Knox is a brand of gelatin, and because it is gelatin and gelatin IS made from animal parts, Knox gelatin (including Knox Unflavored and flavored gelatin) is NOT vegan or vegetarian.

Is Jell-o gelatine vegan? Jell-o is a brand of gelatin, and because it is gelatin and gelatin IS made from animal parts, Knox gelatin (including Knox Unflavored and flavored gelatin) is NOT vegan or vegetarian.

Is kosher gelatin vegan?  For gelatin to be considered “kosher” it must be compliant with Jewish dietary laws.  So while there are strict rules has to which animals are eaten and how they are slaughtered in order for something to be labeled “kosher”, there are still animal parts being used to make the gelatin.  So kosher gelatin is NOT vegan or vegetarian.  Some kosher gelatins are made with fish instead of pigs or cows, but fish-based gelatin would not be considered vegan or vegetarian either.

Is halal gelatin vegan?  For gelatin to be considered “halal” it must be compliant with Islamic dietary laws.  So while there are strict rules has to which animals are eaten and how they are slaughtered in order for something to be labeled “halal”, there are still animal parts being used to make the gelatin.  So halal gelatin is NOT vegan or vegetarian.  Like kosher gelatins, some halal gelatins are made with fish instead of land animals, but fish-based gelatin would not be considered vegan or vegetarian either. 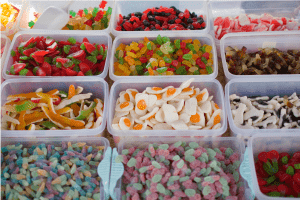 Agar-agar comes from the semi-transparent cell walls of the red algae marine plant – so it is technically a seaweed.  Originally discovered in Japan in the 17th century, Agar-Agar is also known as Japanese kanten, Japanese gelatin, and also China glass, China grass, and  China isinglass.

Just like gelatin, Agar-Agar can be used in sweet, fruit-flavored gelatin recipes (like the Fruity Vegan Jello recipe you’ll find below), as well as puddings, mousse, flan, marshmallows,  jelly, gummies, and ice cream,

Agar-agar has no color, odor, or flavor – so it’s versatile in any type of recipe.

Unlike gelatin which requires warm water to set, Agar-Agar must be boiled to set.  But unlike gelatin, Agar sets much more quickly and does not require refrigeration.  Agar-agar is also more stable than gelatin and produces a slightly firmer texture.

How to substitute Agar-agar for gelatine?

Agar-agar is the easiest – and most reliable – gelatin substitute for home cooks, can be found in most supermarkets or health food stores, and also online.  There are several brands of Agar-agar sold on Amazon….here is just one of them:

Other gelatin substitutes that are vegan (you may see these used in products, or they may be called for in recipes): 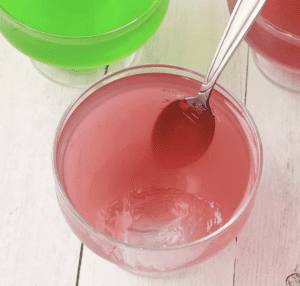 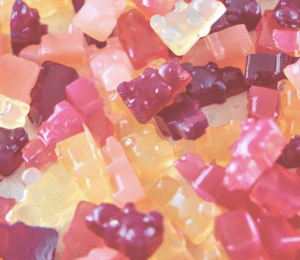 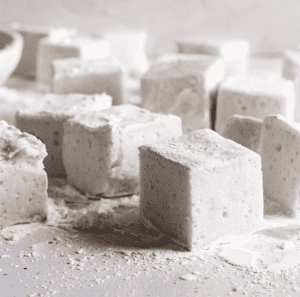 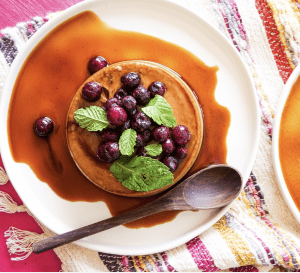 And you can always turn to a boxed vegan jel dessert too (in case you don’t feel like making dessert from scratch!)…

Bakol Jel Dessert – this is just like the jel dessert you remember as a kid – without the gelatin.  It is 100% natural (with no artificial flavors or colors) and 100% vegan.  And it comes in an assortment of fruit flavors (including lemon, orange, raspberry, strawberry, and cherry) as well as unflavored.  Bakol uses  Agar as the gelatin substitute.

I hope this post was helpful!!  To summarize, because gelatin contains animal parts, it is not vegan or vegetarian.  There are vegan substitutes available for home cooking and in packaged foods.