Will you be cooking for a vegan and have NO idea what to make?  Learn some easy vegan options and substitutes in this post! 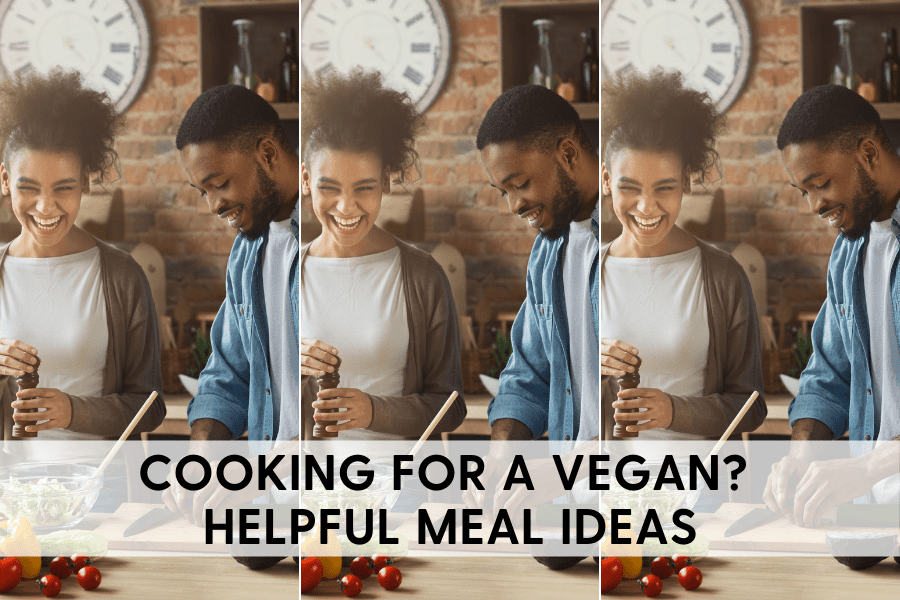 Cooking vegan food does NOT  have to be overwhelming.  And for beginners, it’s best not to overcomplicate it!

If you are completely new to veganism, you may even be wondering what a vegan diet is exactly…what DO vegans eat??  A vegan diet is a way of eating (usually for ethical reasons) that omits all animal products.  So vegans do not eat meat, fish, poultry, eggs, or dairy milk.  And even though you might feel like eliminating all these foods will make cooking difficult, creating vegan options can be super simple with just a few easy swaps to recipes you probably already enjoy!

So keep vegan food EASY (and delicious!) by trying these easy vegan meal options and swaps!

Burritos and tacos can be easily made vegan.  The trick is to make sure that there is something for a vegan to enjoy as a protein.  One easy protein option is to heat up a can of beans (pinto or black beans work best), and season them with your favorite taco seasoning.

Another option is to purchase vegan meat crumbles or vegan chick’n from the grocery store and prepare as directed on the label.  And while you’re at the grocery store, maybe pick-up vegan shredded cheese as a topping (totally optional).

If you prefer to cook everything from scratch,  there are vegan meat-replacement recipes using tofu, jackfruit (a plant that when seasoned can make a great meat substitute), and even ground walnut. 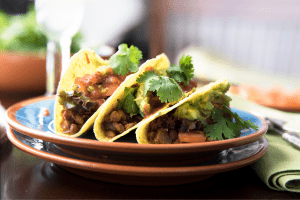 Chili can be easily made vegan simply by leaving out the meat and preparing with your favorite beans.  You can even make TWO separate batches of chilling using all the same ingredients, but omitting any meat/poultry and meat/poultry broth from the vegan portion.

You can also add in vegan beef crumbles as a substitute for ground beef or turkey.  Or check out this recipe for vegan chili using tofu as the “meat” – the name is correct….it really is the BEST vegan chili ever (even meat-eaters LOVE this recipe!)!!

As with burritos and tacos, a little shredded vegan cheese and/or vegan sour cream from the grocery store would always be appreciated (yet optional!). 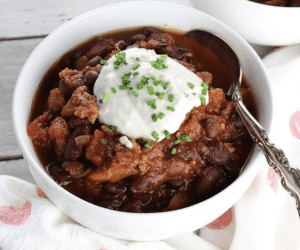 Burgers are an easily vegan-ized meal!  There are SO many vegan burger options available in the supermarket – from healthy, plant-based veggie burgers to burgers that are more meat-like (such as the Impossible Burger and the Beyond Burger) they could fool even a meat-lover.

Condiments that are vegan include both catsup and mustard. And vegan mayonnaise is pretty easy to find in grocery stores (and I promise, the egg won’t be missed from the mayo!).  Favorite vegan mayonnaise brands include Follow Your Heart Vegenaise and Best Food (or Hellmann’s) Vegan Mayonaisse.

If you would like try making a vegan burger from scratch, check out this recipe from Chef Chloe Coscarelli. 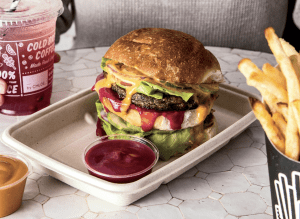 Lentil and split pea soups are easy to make vegan simply by omitting any meat and meat or poultry-based broth or stock (simply use veggie broth or stock instead). An excellent recipe to try is from a well-known, non-vegan Food Network chef – Ina Garten (aka The Barefoot Contessa).  Check out her recipe for split pea soup here – it has potatoes and carrots, and it’s packed with healthy protein and fiber (just make sure to use a veggie stock not chicken stock, to keep it vegan!).  Both vegans AND non-vegans will love this recipe!

Tip: a favorite vegan broth is Better Than Bouillon No-Chicken Base – it has the BEST flavor for cooking and sauteing. 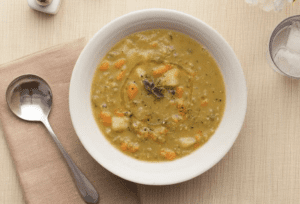 Pasta is easily vegan-ized  Most packaged dry pasta is vegan – just make sure there are no eggs in the ingredients. Many grocery stores even carry vegan ravioli that are absolutely delicious, such as this one from Kite Hill!

Make an easy marinara sauce at home (or buy jarred) and serve with pasta!  Or add vegan meatballs (Gardein Meatless Meatballs are a favorite) or vegan sliced sausage. Many stores carry vegan parmesan to top with if you’d like to offer, or make your own at home with this recipe. 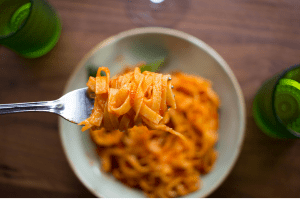 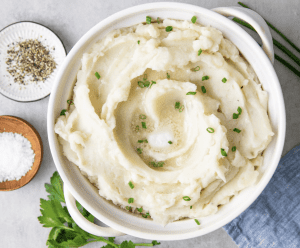 It might be hard to believe that pizza can still be pretty AMAZING without cheese….but trust me, with the right ingredients it’s delicious and satisfying (and SO much healthier!) than pizza loaded with cheese!!  A build-your-own pizza party makes a fun dinner for everyone – vegan or not!

For vegans, a homemade or store-bought crust topped with marinara sauce (or simply olive oil!) and an assortment of veggies – such as spinach, mushrooms, onions, peppers – is often enough!  But it’s nice to offer some shredded vegan mozzarella from the grocery store too!

Check out this popular vegan pizza recipe from The Minimalist Baker as inspiration. 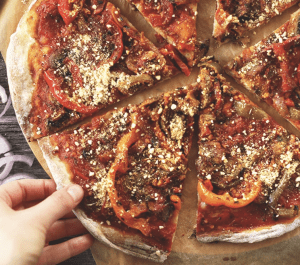 Vegan salads go WAY beyond iceberg lettuce and a few carrot shreds. Most vegans love salads loaded with any kind of vegetables and vegan proteins such as garbanzo beans (chickpeas), black beans, and diced tofu.  And these can be enjoyed by both vegans AND non-vegans by simply swapping out the protein AND ensuring the dressing is vegan (check the ingredient list for milk or egg).

Before I went vegan, one of my FAVORITE salads was from the restaurant California Pizza Kitchen.  I was THRILLED to find a copycat vegan version of this salad online.  Check it out here….it’s SO delicious and filling!! 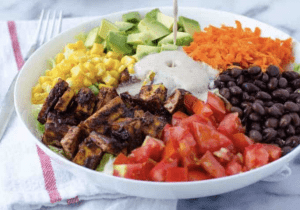 Want to make a cake for your favorite vegan, but have no clue where to start?   One of the BEST cake recipes is “accidentally” vegan (meaning it wasn’t intended to be vegan….it just “accidentally” is!).  It’s called Wacky Cake or Depression Cake.  The name “Depression Cake” came out of the Great Depression, when people couldn’t afford butter, eggs, or milk.  They made do with what they had….and it was ALL vegan.  There are a lot of Depression Cake recipes to be found online….most recipes are very similar.  And you can find whatever flavor cake you’d like. Here is one sample recipe to check out!  Top it with a simple vegan buttercream (and then invite me over!…haha). 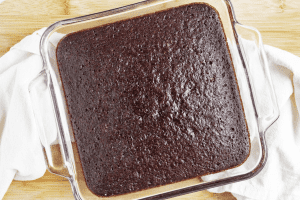 I hope this post has been helpful as you plan to cook for a vegan.  It doesn’t have to be overwhelming or complicated…you just need a few easy swaps to vegan-ize your favorite foods!

Vegan of Plant-Based – What’s the difference?