A lot of people struggle with whether to eat fish or not….are fish animals? Should people who care about the welfare of land animals also care about the creatures in the water?  Find out in this post.

This post contains affiliate links for which I may earn a commission (at no extra cost to you) should you make a purchase. As an Amazon Associate, I earn from qualifying purchases. Please see my Terms and Conditions for more information.

Are fish animals?  And should you eat them?  A lot of people who care about the welfare of animals wonder about this.  And many choose to be “pescatarian” – they stop eating meat and poultry and continue to eat fish and shellfish (such as lobster, crab, etc) – because they think fish are not animals so they don’t feel pain like cows or pigs or chickens do.  But is this so?

This post will help you understand a little more about fish so that you can decide for yourself whether you want to eat them.

Are fish animals? How to decide whether to be vegan or pescatarian.

So what exactly IS a fish?

And are fish animals?

By definition, an animal is “a living thing that is not a human being or plant”.

A fish IS considered to be a vertebrate animal – meaning it is an animal with a backbone (like humans and all other mammals, birds, reptiles, and amphibians). But instead of living on land, fish live and breathe (through gills) in water.

According to Culum Brown, a Professor of National Science at Macquarie University in Australia, fish are far more intelligent than they may appear, and “in many areas, such as memory, their cognitive powers match or exceed those of ‘higher’ vertebrates including non-human primates.”

Through evolution, fish have developed extra sensitive hearing, taste, and smell to navigate in water sometimes filled with predators.  They also have the intelligence to learn certain behaviors – even to avoid fishing nets! – simply by observing the actions of other fish.

And fish are social animals, and they organize together (typically by type of fish) into shoals (or schools of fish).  These shoals not only help the fish find food and protect them from predators but also help them find mates and females may release eggs together in shoals for protection.  Fish can also remember other fish and the interactions (good or bad) that they had with them. 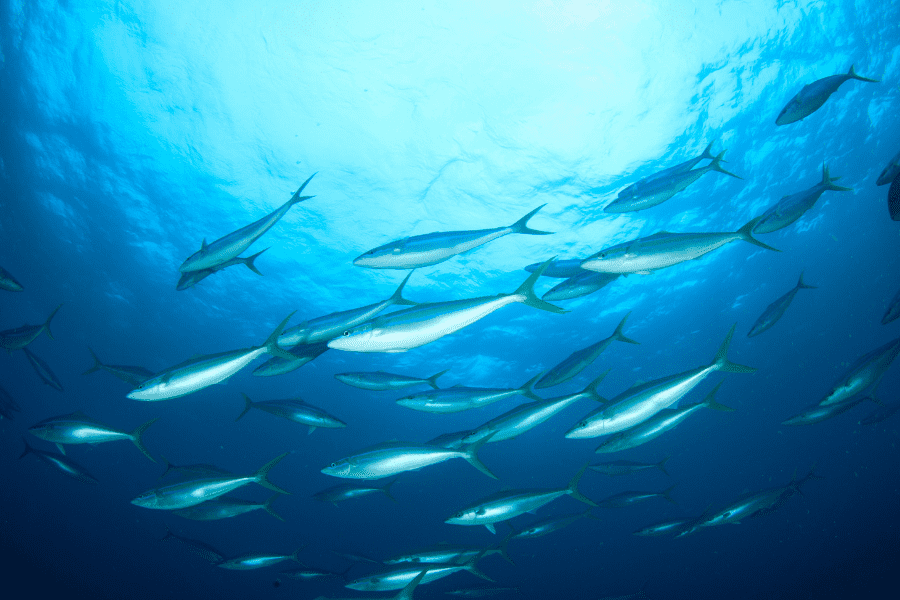 You probably have heard of “catch and release” fishing, where someone catches a fish with a fishing rod and then removes the hook from the fish’s mouth and releases it back in the water.  Does the fish feel pain from the hook?

Fish typically die from suffocation, however, and just as a human or other land animals suffers when drowning, fish suffer when removed from the water. Fish on land painfully flap, wriggle and gasp as they slowly die.  It is a painful and prolonged death.

So although we will likely never know if fish feel pain the exact same way humans do, studies show that fish DO feel pain.

“But eating fish is healthy, isn’t it?”

Not necessarily.  Our water systems are polluted, and when you eat fish, your body absorbs the pollutants the fish have been living in.

One type of pollutant that has been increasing since the Industrial Revolution is mercury, which is now being found in highly concentrated amounts in our oceans and streams.  One study found that one-quarter of all fish in the United States contained high levels of mercury.  Too much mercury in humans can cause mercury poisoning, which can cause serious neurological problems (including memory problems, tremors, anxiety, depressions, headaches, vision loss, impaired speech, and muscle weakness).  High mercury levels are especially dangerous to pregnant women and infants. 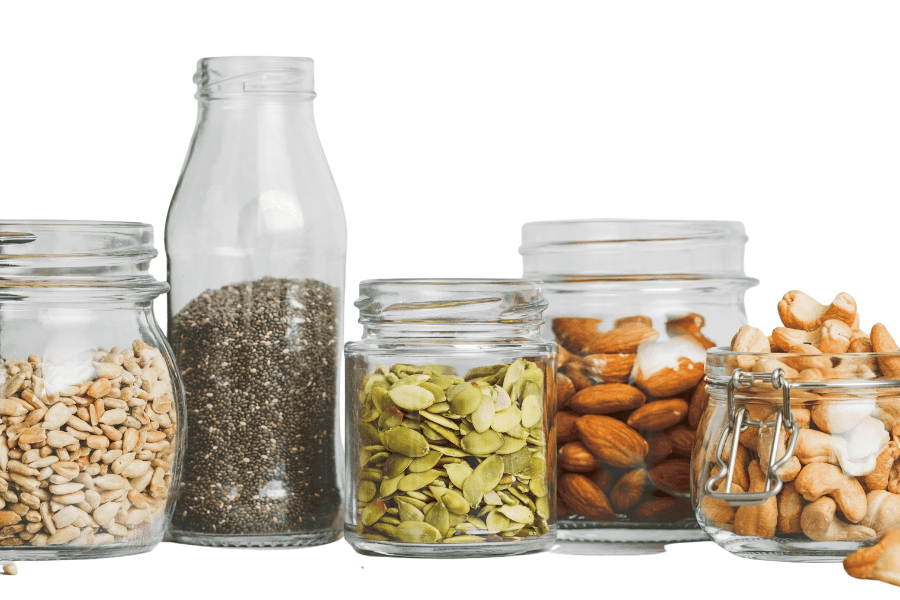 Many people eat fish (or take fish oil supplements for the Omega 3 fatty acids). Omega-3 fatty acids are essential for the brain and heart.  They can help lower blood pressure, reduce your risk of a heart attack or stroke, and they have been shown to help prevent the buildup of plaque in arteries.

But contrary to popular belief, fish do not PRODUCE Omega 3 fatty acids.  Fish get Omega 3s from eating sea plants – or algae,  So it is NOT necessary to eat fish (or take fish oil) to get your Omega 3s.  You can cut out the middle man (or middle fish in this case!) and add any of the following plant foods – all high in Omega 3s – to your diet:

Commercial fishing is bad for our planet

Commercial fishing is causing our fish populations to dwindle. And our water ecosystems are being destroyed by overfishing. This is also creating disastrous pollution in our waterways.  . Experts predict fishless oceans by the year 2048. This is important because the ocean plays a big part in regulating temperature and it also creates fifty percent of our oxygen on Earth.

The situation is so dire that researchers are predicting the extinction of all salt-water fish by 2048. Such a preventable tragedy.

So now you know that fish ARE animals – and that they are intelligent and social animals, that feel pain.  You also now know about eating fish and your health, and how fishing is affecting our planet.  I hope this post was beneficial in helping you decide if you want to continue eating fish.

Is Soy Healthy? Facts About Soy You Should Know